Jump to navigation Jump to search

There is a lower bound to how slowly we can pulse the stepper. See ArduinoAccuratePulser for a much better solution. Eventually, there may be a LCD panel that can control the pulse stream see ArduinoLcdTest and ArduinoTouch

This project also shows one way to do unit testing on an Arduino Sketch. It uses Google Test to run some test cases. See Tools and other Setup#Googletest to set it up.

It then initializes the Pulser and the Parser.

The Pulser is used to perform the pulsing of the GPIO pin at a regular interval.

When the Pulser gets a request to Go! from the Parser:

The Pulser uses an array to spread the requested number of pulses across a longer time period. The current code uses an array with only 5 slots in it. Each slot is visited when the ISR interrupt occurs, in this case every 100ms.

A final version of this would use a larger number, say 1000 slots (or longer) in the array and each slot visited every 100ms. This would spread the total number of requested pulses across 100ms * 1000 = 100 seconds.

It doesn't work very well for other values. For example if the requested number of pulses is 9, then 9 / 5 is 1 in integer arithmetic. (I have to use integer arithmetic since I can't to a partial pulse!) So in this case, I end up only pulsing 1 time per slot and with 5 slots, that's only 5 times instead of the 9 that was requested. See ArduinoAccuratePulser and Low_Rate_Peristaltic_Pump#Pulse_Distribution for a solution.

When the Pulser gets a request to Stop! from the Parser:

The ISR is triggered on every Timer2 interrupt. Currently that's set to 100ms.

The ISR routine does the following:

On an oscilloscope, this sequence shows up as a sequence of very fast pulses followed by a period of dead space. 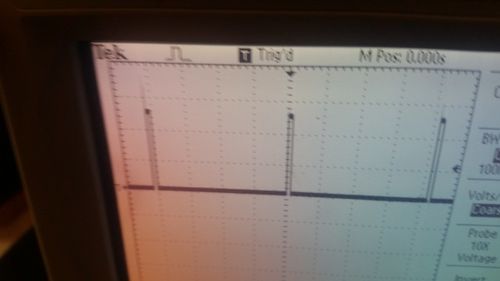 If you give a Go! command with more pulses the width of the very fast pulses sequence gets wider. 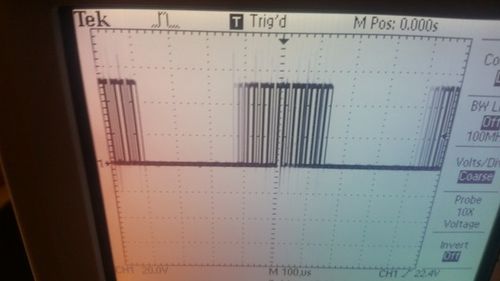 Note: that the pulse width is 10uS. This may or may not be long enough for a particular stepper motor.

Also, each pulse immediately follows the previous pulse. The stepper motor may require a short reset after each pulse.

The Parser is used to parse the incoming commands from the ruby script (see auto_test.rb). The parser can accept the following commands:

Get the total number of pulses across all slots of the pulse array. <n> is in decimal format.

Example: g100<cr> will spread 100 pulses evenly through all slots in the pulse array.

It returns the per slot value and the total number of slots on success.

Note: currently there is no bounds checking. You could enter "g1234567890" and it would accept it without errors or warnings. This number could, for example, overflow the variables used to convert it to an internal Arduino integer variable. Or it could overflow the maximum value an array slot can hold.

Some odd-ball things are checked. For example "g-10" will give you a warning about the "-".

More complex scenarios can cause a domino effect of errors. In "g-10" causes a warning about "-", but then the Parser resets itself and since "1" is not a valid command, it gives you another warning and resets itself. see #Notes for an alternative method.

Stops the pulsing by clearing the pulse array

Returns statistics about the current pulsing

The pulsing is done in the ISR, so main() simple looks at the serial port for anything to do.

The unit tests are in a separate directory called "ut" and have their own Makefile.

Here's what it looks like when everything is passing. The very bottom line says "PASSED".

I modified an expected result so it would fail. The bottom line says "1 FAILED TEST" and the Makefile warns about a bad return code "make: *** [run] Error 1"

In this example, I changed this line:

The resulting output shows that the Expected value should have been "120" but actually it was 10.

The failure occurred in ut.cpp in line 22 which is the line above.

To "run" the Arduino sketch, I needed to simulate or "mock" the Arduino library calls. For example, the Serial.print() calls. These are specified in Arduino.h and mock_arduino.h.

In this sketch's case, I also needed to mock out some interrupt and gpio related calls, see avr/interrupt.h and wiring_private.h for them.

Note that I included the ArduinoPulser.ino" file. This gives the the TCs access to all privately scoped variables in the file (e.g. "static int x" is visible to the TC)

This tests the Stop! behavior for a "happy path", i.e. the normal, expected behavior when all goes well. The happy path usually tests the majority of execution time. Subsequent TCs should test for odd-ball, edge-condition, failures, recoveries, etc. not-happy-path. Generally speaking, most code is used for these conditions, but most execution time is spent in the happy path. Sort of like real life :)

I called mock_init() to reset the state of all of the mocked variables. For example it keeps track of the number of times interrupts were cleared and restored, so that test cases can check if they were called the correct number of times. These need to be reset in each test case so previous test cases don't interfere with the current results.

setup() calls the sketch's setup. Again this ensures that the current state of the simulated system is reset to a known initial state.

This next section simulates some pulses and some ticks. This is just to get non-zero values in place. To simplify the TC, I didn't call the ISR to simulate running, see TEST(isr, happy_path) for that.

This section simulates receiving a Stop! command: "s" followed by a carriage return.

It then checks that the correct serial output is generated. In this case, a simple "ACK" followed by a linefeed. See Arduino.h and mock_arduino.cpp for the various mocked Serial calls:

This checks if the pulses and ticks are saved in the "last_xx" variables and that the current variables "curr_xx" are set to 0.

This checks the pulse array slots are all 0.

And finally it checks the set and clear interrupt were called the right number of times.

Some of the code in mock_arduino.h came from existing code in Arduino.h and other AVR code.

I put most of the mock values in a struct to group them together. This is very "C"-like, a more C++ way would be to put them in a class.

This section sets up some #defines to replicate what is done in the existing Arduino and AVR libraries. These are most related to some AVR registers used for setting up the Timer2.

Arduino.h mocks the Serial port. These are only the calls I used in the ut.cpp, there are probably many other functions in Arduino's Serial class that needs to be mocked out. These are sufficient for this project, for now.

The wiring_private.h just contains references to setting and clearing a bit in a port register

The avr/interrupt.h holds routines for interrupts and various support definitions.

The #define for the ISR translates the the call in ArduinoPulser.ino to a unique function name.

Back in avr/interrupt.h, there are a few mocks related to the Timer2 register values and setting/clearing interrupts.

This file provides most of the code for simulating various functions and for providing symbols for the linker to be happy.

These provide variables to for the ArduinoPulser code to work on. In this project, I don't care that much if they are set correctly, but since they are not static, a TC could check them.

mock_init() is used to reset the overall state to a known configuration.

The next section mocks out the Serial I/O. In this case I do care about the content, so these functions simulate actual input and output functions.

The serial output is just a buffer in memory that the TC can check to see if the output is what it should be.

The mock_clear_serial_out() function resets the buffer to "" (empty string).

This line declares a variable as Serial so all of the .ino calls will reference this one variable.

Note there is no buffer length checking in any of these! It is possible that a TC goes amok and goes past the end of the serial buffer (currently 2048 bytes, see mock_arduino.h)

We're optimists. There is always a character available to read. In this project, this is sufficient since I can call parser_handle_ch(ch) in a TC to input whatever character I need.

In other projects, there may have to be a Serial input buffer. In that case, available() could check a pointer or index into that buffer and check return true/false if there's anything in there.

These two functions just simulate setting/clearing a pin. In the TCs, I only care if the the pin is set and then cleared the same number of times, so the current mock behavior is sufficient.

Other projects may want to also keep track of the current state of the pin and give mock_xx functions to check the pin is in the correct state.

This is another typical example of a function that doesn't require a simulation. If you look in mock_arduino.cpp most of the functions are like this. These are required only to keep the linker happy.

In a TC, it is not usually required to run in "real time" so an actual delay would never occur. However in other projects, it may be possible that the requested delay could be checked or that the total delay over many calls is important. In those cases, there would be additional functionality and additional functions to keep track of those things.

A simpler parsing scheme is to:

In this way, it is possible to throw out the entire buffer on an invalid command etc.

On the other hand this technique has problems too: