The original game of Life was described by John Conway here Conway's Scientific American Article and a Java implementation is here Game Of Life.

This design essentially came from a conversation my son, Thomas, and I had about evolution and how things interact.

How to use it

If all the Animals die, press Re-init!

You can modify these parameters:

What the colors mean

What the text means

This screen shot shows jxLife just after 370 generations, a few seconds after start up. The screen is randomly set to have Animals or not, in this case there are 1,273 Animals. The big die-off has already occurred and six colonies have started. 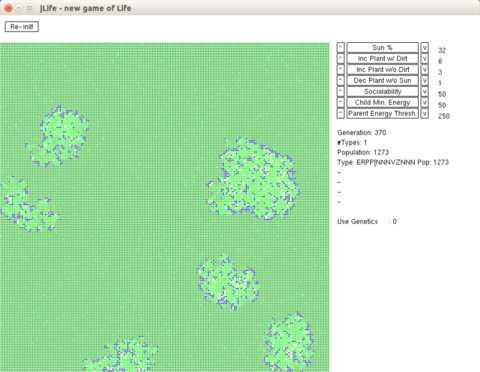 This screen shot shows jxLife after a Re-init and at 570 generations. In this run, colonies have merged into two large clumps. 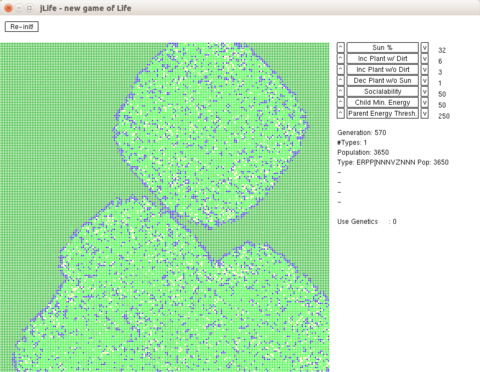 After the first initialization is done, there is a big "die-off" where most of the initial Animals die from starvation. The result is usually less than 100 Animals are on the screen. During the pause where there are few Animals, the plant life builds up. Then one to four "colonies" start up. Within a short time, the entire screen is filled with Animals eating at the abundant plant life, usually up to 2000 - 3000.

But eventually the plants run out and another "die-off" starts. The Animals almost go extinct, some times down to a few hundred. The plant life recovers and the Animals re-populate again.

This cycle will continue for hours. It is possible for the population to go extinct but it's rare.

Try setting Sun% from it's default of 32 down to 31, 30, 29 and so on. Notice that the downward swing of the Animal population goes closer and closer to zero. There will be a point where the Animals do not start up (somewhere around 26 or 27). Reset Sun% to around 32 and click the Re-Init! button to recover.

Try setting the Sun% to 80. It's difficult to describe what seems to happen here. The food is so plentiful, the Animals go crazy eating and replicating. The color patterns appear kind of "inverted" from the normal case, but that's just because there are so many Animals.

Now set Socialibility to 100 and leave Sunshine% at 80. The Animals clump in tiny tribes of 5 - 10 each. They can split in two and new tribes show up.

Leave Socialibility at 100 and set Sunshine% to 50. The population drops dramatically, most of the time going to zero.

Reset Sun% to 32 and set Socialibility to 80. Press Re-init. The Animals form tribes that are "looser" than in the previous case. Slowly increaese Socialability to around 90. There's a bit of die-off, so increase Sun% to 35 or so. Continue to push Sociabability upwards and Sun% updwards while maintaining a low number of animals, say less than 1000. At some point, you should reach 100 Socialability (it's difficult!) and the Sun% should be around 80 - 85. The tribes are small, stable and they don't move very much because they don't have to. The food is there, they can stay close together without having to chase food because it regrows so quickly.

Notice the total pouplation is in one large clump. Smaller tribes have killed off and the one tribe (actually a close association of smmaller tribes) has formed.

Lower the Child Minimum Energy from 50 to 45. This means that a child is viable with less Energy. The population rises quickly. Descrease the Sun% to get it back to around 1000.

Now, change Socialability from 100 to 97. The population explodes and the screen is filled within a minute or so.

What happens every Generation

Animals die if their energy is too low

The Circle of Life

It takes energey to have a child

Animals can be made socialable